In late 2019, the patient’s choice to move to an assisted living facility seemed like a good idea — a chance for more social interaction and help with meals and medical care. Jose Luis Pelaez/Getty Images hide caption 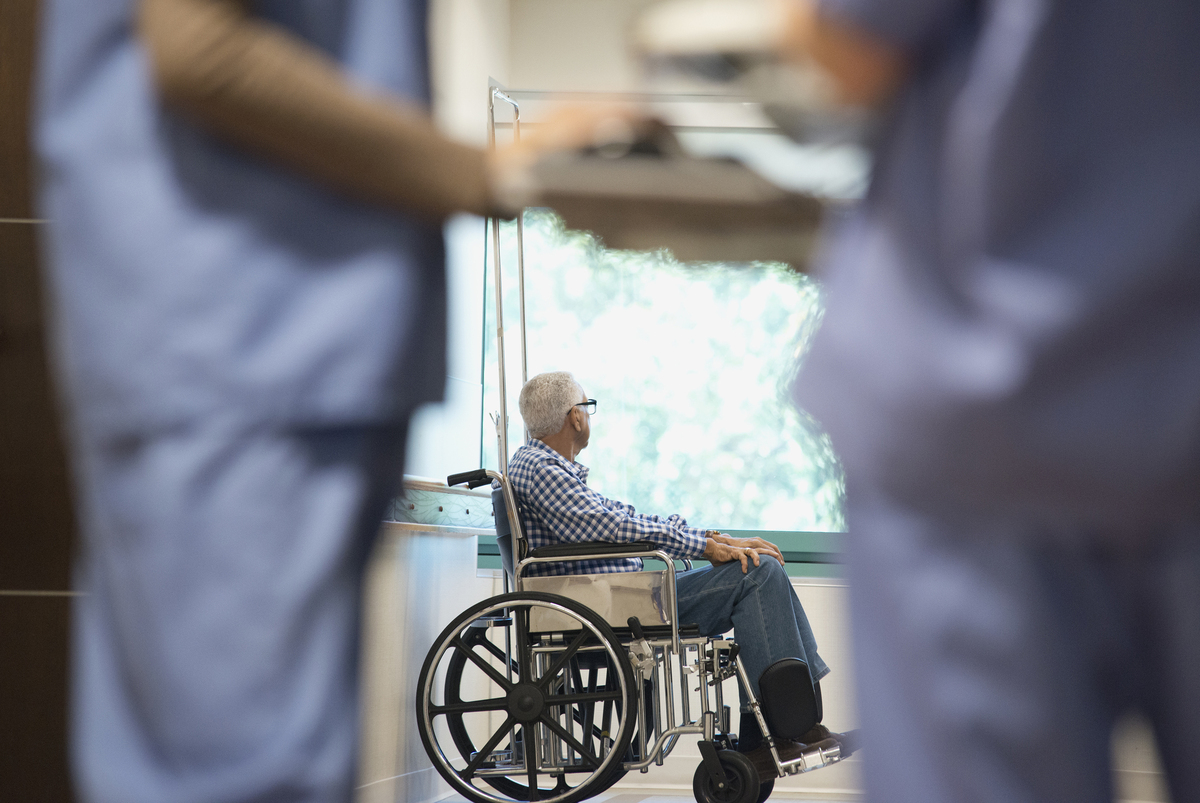 In late 2019, the patient’s choice to move to an assisted living facility seemed like a good idea — a chance for more social interaction and help with meals and medical care.

Carl was in his early 70s. A Vietnam vet, he suffered from PTSD along with his diabetes, high blood pressure, and smoking-induced COPD. He’d survived a bout of kidney cancer, too, along his medical journey.

In late 2019 he came to see me because he was considering making a move to an assisted living facility. I thought it was a good idea — as an older male with previous suicide attempts, I was worried that loneliness would compound his difficulties.

Carl was estranged from his family. I knew he had an adult son and daughter, but he refused to talk about them let alone to them.

Assisted living would provide some community in addition to three squares a day. The facility also had a nurse who could help with medical care.

About a month after he moved there, the nurse called to tell me that she’d sent Carl to the hospital for fever and shortness of breath. His oxygen saturation had dipped below 90%.

This was in early March, when COVID-19 was still mostly in China and Italy. Our lives hadn’t stopped. Yet.

Carl was admitted to the ICU with “double pneumonia.” On his chest X-ray, there was evidence of it in both lungs. Not surprising for an older man with a long history of smoking, lung disease and diabetes.

Carl narrowly avoided intubation. With careful ministrations he turned the corner and was discharged back to his facility after a lengthy hospitalization. A nasal swab came back positive for influenza. Flu had been the culprit!

His return to assisted living occurred right around the time the world was shutting down. All of our lives were changing dramatically.

Carl was quarantined in the facility. The nurse working there actually lived-in during March and April, until it was no longer feasible. She and the other staff did everything they could to keep their residents safe.

The happiest I heard him this whole year was when he revealed that he and some friends in the facility would play late night card games — with an assist from a friendly aide who didn’t report them.


Prior to his hospitalization, Carl had come in my office every month. It helped quell his anxiety. Now that his facility was on lockdown, our visits had to be by telephone.

I was amazed he’d survived his hospitalization, let alone that he had somehow missed getting COVID. His lungs were practically kindling for this type of infection.

Throughout the spring, summer and fall, Carl and I talked, sometimes weekly. He was frustrated that he couldn’t go anywhere.

In one of the perversities of the pandemic, Carl started smoking again just so he could go outdoors to have a cigarette a few times per day.

The happiest I heard him this whole year was when he revealed that he and some friends in the facility would play late night card games — with an assist from a friendly aide who didn’t report them.

By fall, there had been sporadic cases in his facility. He and his fellow card players were remanded to their rooms again. He was not a happy camper.

All along, I was fearful that Carl would eventually test positive. He was high risk, and elder care facilities have acted as accelerators to COVID-19’s spread.

In December, it finally happened. Another fateful call from the nurse.

Carl was sent back to the hospital for fever and symptoms. He tested positive for COVID-19 this time.

Amazingly, after a three day observation, Carl was deemed medically stable for discharge. He’d had fever and aches without the pulmonary involvement this time.

Because of the number of cases at his facility, he had to first go into isolation in a skilled nursing facility — one used as a transition zone between the land of the sick and home.

While there on a Saturday, he began to decompensate. His oxygen saturation dropped, and he was sent back to the hospital.

I was able to converse with his bedside nurse, who told me he was struggling to breathe, but remained lucid. I was able to get there in time to say goodbye.

Carl was in a COVID-specific unit that had been commandeered from ‘regular’ hospital use because of the pandemic.

His bedside nurse was visibly pregnant. “I’ve already had COVID,” she told me.

Carl had clearly expressed his desire not to be intubated or have ‘heroic’ measures taken to try to prolong his life. He and I had talked about it a lot after his prior hospitalization.

All year the specter of COVID had hung over Carl. Over all of us. And now, with vaccines imminent, his number was being called.

It was a cruel twist of chance and illness — one that will continue to play out over and over for at least much of 2021, as the pandemic continues its deadly march through America and most of the world.

I have no doubt that if Carl had been able to keep dodging coronavirus long enough to get vaccinated, he’d have been delighted to get immunized and have many more nights of cards to look forward to.

As I stood by his bedside, Carl shook my gloved hand and said, “Keep doing the good work you’re doing,” knowing it would be the last time we spoke.

He died a few hours later.

John Henning Schumann is a doctor and writer in Tulsa, Okla. He hosts StudioTulsa’s Medical Mondays on KWGS Public Radio Tulsa. Follow him on Twitter: @GlassHospital.

Timeline: What We Know Of President Trump’s COVID-19 Diagnosis – NPR

Timeline: What We Know Of President Trump’s COVID-19 Diagnosis  NPRCovid-19 Live Updates: Trump Is Not Out of Danger, Official Says  The New York TimesDoctors add to confusion about timing of Trump Covid-19 diagnosis  STATTrump’s doctor walks backs comments on timing of President’s Covid-19 diagnosis and treatment  CNNWhen was Trump diagnosed with Covid-19? It may have…