For the 20th straight day, there were virtually no vacant intensive care beds available across much of California as hospitals scrambled to treat wave after wave of new COVID-19 patients.

“This surge has been relentless,” said Dr. Ahmad Kamal, Santa Clara County’s COVID-19 director, during a Wednesday press briefing. “It is straining our health care system to a breaking point.”

Intensive care bed availability in the Bay Area rose fractionally on Wednesday to 7.4%, but the overall picture across the state looked grim. Capacity remained at 0% in Southern California and the San Joaquin Valley, the two hardest-hit regions.

A record 21,922 people were hospitalized with a confirmed case of COVID-19 in California as of Wednesday, according to data compiled by The Chronicle. Nearly 4,700 of those patients were in intensive care units.

There were 503 new COVID-19 deaths reported — well above the two-week daily average of just under 300 deaths a day. 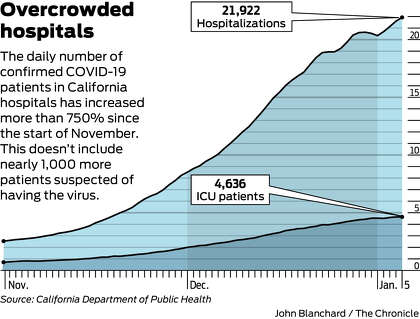 The total number of confirmed cases in California grew by 43,907, pushing the state over 2.5 million confirmed infections since the start of the pandemic.

Health officials urged residents to stay home, mask up and avoid frivolous 911 calls due to the unprecedented strain on hospitals and emergency medical systems.

“The E.R. is full,” said Dr. Jeffrey Chien, the director of the emergency department at the Santa Clara Valley Medical Center in San Jose. “Folks are waiting for beds — we’re getting really creative with places to seat patients.”

The dire warning came after some hospitals in Santa Clara County reported waits of up to seven hours to put patients in beds.

The news briefing came as a report emerged that nearly 10% of the emergency room staff at a Gilroy hospital have tested positive for the coronavirus, the second outbreak to hit South Bay hospitals in recent weeks.

Eight out of around 80 emergency department staff at St. Louise Regional Hospital contracted the coronavirus in the past week, Joy Alexiou, public information officer for the Santa Clara Valley Health and Hospital System, said Wednesday.

Infected staff members are quarantining and none required hospitalization. 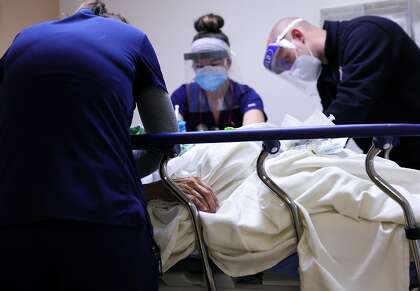 Santa Clara County Counsel James Williams said he expects the state will extend the regional stay-at-home order for the Bay Area, which is set to expire on Friday.

The order was already extended in the Southern California and San Joaquin Valley regions.

“We have every indication it will be extended here in the Bay Area as well because the hospital situation has not improved since it was issued,” Williams said.

The picture in the Southern California region was even more dire, with public health data showing that more than 1,000 residents in Los Angeles County have died of COVID-19 over the past week.

“L.A. County reached the terrible milestone of more than 11,000 deaths due to COVID-19,” Los Angeles County Department of Public Health Director Dr. Barbara Ferrer said in a statement Wednesday. “As a community, we must commit to stopping the spread of COVID-19 in its tracks so that we can save as many lives as possible.”

Los Angeles County health officials have directed ambulance crews not to transport patients with little chance of survival to hospitals and to conserve the use of oxygen.

California has assigned more than 1,420 additional medical personnel around the state in an effort to lessen the strain on hospitals facing surging new cases and hospitalizations.

The program is being managed by the state’s Office of Emergency Services and includes members of the National Guard, emergency responders and over 800 contractors.

The staggering number of new cases, hospitalizations and deaths come as vaccines continue to trickle out. Less than one-third of the available vaccine doses have been administered in California so far, according to state data.

As of Tuesday, 459,564 doses out of the 1,762,900 allocated to California had been administered, covering roughly 1.5% of the state’s entire population of adults. 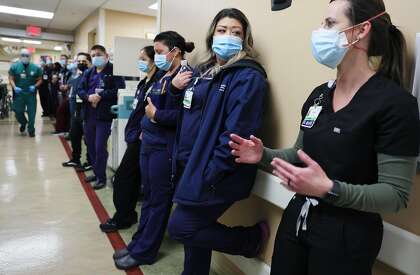 U.S. Health and Human Services Secretary Alex Azar said at a press briefing Wednesday that states should not let priority recommendations get in the way of distributing vaccines. He said states like California should open up vaccinations to older adults and vulnerable groups.

Pharmacy chains CVS and Walgreens said Wednesday that they expect to complete the first round of vaccinations at skilled nursing facilities by Jan. 25.

In a statement, CVS Health CEO Larry J. Merlo said the company is in discussions with several states to make a limited number of doses available in the coming weeks at its CVS Pharmacy locations in advance of the broader rollout.

Concern continued to grow around a highly contagious variant of the coronavirus that has been discovered in California.

Twenty-four new cases of a mutated SARS-CoV-2 strain, known as “B117” and first identified in the United Kingdom in December, were discovered in San Diego County on Tuesday.

Out of the 24 newly confirmed patients, four are children under 10. The infected are believed to have no travel history and to have come from 19 different households, county officials said.

“The fact that these cases have been identified in multiple parts of the region shows that this strain of the virus could be rapidly spreading,” said Wilma Wooten, San Diego County’s public health officer.

Gov. Gavin Newsom canceled his daily COVID-19 update Wednesday in response to the events transpiring at the U.S. Capitol, where protesters overran the building during congressional presidential confirmation proceedings.

Earlier in the day, Newsom called for $600 stimulus payments to low-income Californians. With less than a month to go before California property owners could resume evicting tenants who have not paid their rent, he also said that he would support extending the state’s partial eviction moratorium.